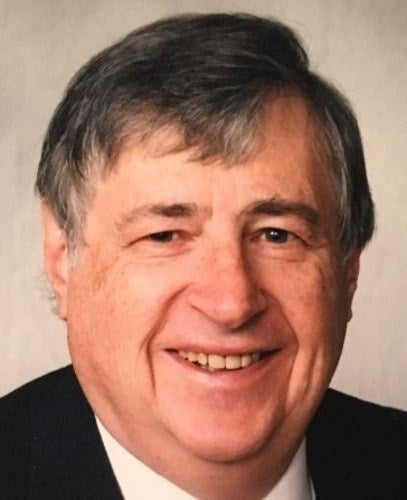 Rob Roy was a long time faculty member in BME and also served as head of the department from 1985-1994. It is with sadness that we were informed of him passing away on December 5. His obituary is shown below:

NAPLES, Fla. - Rob J. Roy, MD., D. Eng. Sc. of Naples, Fla. and Albany, passed away peacefully in his sleep on December 5, 2022.
Born in Brooklyn on January 2, 1933, with a keen intellect and inherent thirst for knowledge, Rob's love of science, music, literature, history, athletics and art endeared him to all who considered him a true Renaissance man.
As a boy in Brooklyn, he enjoyed playing stickball in the streets and basketball in various church leagues. Developing an early sense of responsibility Rob delivered newspapers, repaired electronics throughout his neighborhood, and did whatever odd jobs he could find to help support his family. While attending high school at Brooklyn Tech he was enlisted with the New York Army National Guard from 1947 to 1951, initially serving in the 42nd Division before concluding his time with them in the 7th Regiment. He attended The Cooper Union for the Advancement of Science and Art and earned his Bachelor of Science in electrical engineering in 1954. He obtained a Master of Science in electrical engineering from Columbia University in 1956. During this time Rob joined the Freemasons, completing the requirements of a Master Mason in 1959. He then moved to Troy and completed his Doctor of Engineering from Rensselaer Polytechnic Institute in 1962.
Commencing his career as a professor in the electrical engineering department at Rensselaer Polytechnic Institute, Rob attained vast amounts of expertise in many areas, including radar systems, digital signal and biological systems processing. For his work with NASA, he was presented with two certificates of merit for his multiple contributions, most notably his work on the guidance system of the Saturn V booster that sent the first astronauts to the moon. Rob was consulted on many projects involving cutting-edge technology for corporations such as Raytheon. His research at RPI with graduate students and post doctoral candidates led him to receive multiple grants from NASA, the National Institute of Health, and the National Science Foundation.
While serving as the director of the Digital Systems lab at RPI, Rob was selected to aid in designing a trauma unit for Albany Medical Center. In order to enhance his understanding of the physiological concepts of a trauma patient he decided to attend courses in medical school. Encouraged by a respected mentor, he passed the exams of a second-year medical student and decided to pursue his Doctor of Medicine which he received from Albany Medical College in 1976. He specialized in anesthesia, doing a residency, passing his boards, and ultimately attaining the title of Fellow of the Society of Anesthesiologists.
Rob's unique combination of credentials paved the way for RPI to create a Biomedical Engineering Department where Rob served as chairman from 1985-1994. Concurrent with being a full professor at RPI he worked as an attending anesthesiologist and chief of Vascular Anesthesia at Albany Medical Center.
A prodigious researcher and celebrated author, he contributed more than 200 papers to professional journals and authored the book, "State Variables for Engineers" in 1965 which he revised for the 1998 edition. Eventually, Rob became a reviewer for 12 professional journals and held numerous patents.
Rob maintained affiliations with the American Society of Anesthesiologists, Sigma Xi, Tau Beta Pi, The Scientific Research Honor Society and Eta Kappa Nu. He was a lifetime senior member of the Institute of Electrical and Electronics Engineers as well as recognized as an Outstanding Young Man of America and an American Man of Science. Furthermore, he was a grantee of NASA, the National Institute of Health and the National Science Foundation. Recognized as one of the Best Doctors in America in 2002 and 2003, Rob was a diplomate of the American Board of Anesthesiology for practice in the states of New York and Florida.
Retirement found Rob in his workshop designing and building his own furnishings using exotic woods on the scale of a master craftsman. His eclectic musical tastes spanned Big Bands and Avant Garde Jazz to Frank Sinatra and the Rolling Stones. Favorite poets included Rudyard Kipling and T.S. Eliot. Of quick wit, he was ever ready to elevate your spirits with a joke or a story. A voracious reader and adept cruciverbalist, Rob would dumbfound his family by doing the New York Times Sunday crossword puzzle in pen. While Paris, France remained his favorite city, Rob loved exploring and immersing himself in the cultures of many worldly destinations. He meandered in museums, savored native cuisines and made a point to learn and practice the customary greetings of each land. He was an ever-interested, vastly talented and multifaceted contributor to the world at large. Closer to home, the patriarchal duty to his family was his primary devotion.
Rob is survived by his wife, Judith; his former spouse, Carole Arden and their sons, Robert (Teri) Roy, David (Eve) Roy and children with former spouse Marine Linard, Tristan (deceased), Hadrien and Cyprien Roy, Bruce (Margaret) Roy and their children Ian and Keira; his stepchildren, Colleen Phillips and Christopher (Kathleen) Phillips; his sister, Lynde (Howard) LaFever; his brother-in-law, Bill Miller; his niece, Dr. Marian Miller (Charles Swift); his nephew, Steven (Michelle) Miller; his step-grandchildren, Nicole and Nicholas Phillips, Libby (Jo) Cartagena, Daniel, Rachael, Jennifer, and Matthew Glore; his great-nieces and nephews, Sienna Rose Swift, Jessica, Matthew, Christopher and Jacob Miller; and his step-great-grandchildren, Joseph and Adam Cartagena. He was predeceased by his beloved sister, Dr. Rhoda Miller. Rob also leaves behind a multitude of cousins, relatives near and far, friends and colleagues.
"To do the useful thing, to say the courageous thing, to contemplate the beautiful thing: that is enough for one man's life." - T.S. Eliot