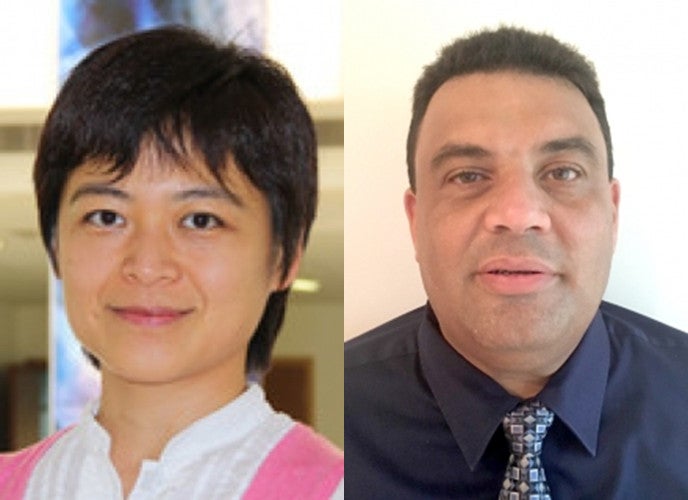 Dr. Xun Wang and Dr. Hisham Mohamed have been promoted to the rank of Senior Lecturer.

Dr. Wang received her BS and MS degrees from Shandong University in China in 1997 and 1998, respectively and her PhD degree in Mechanical Engineering from the University of Manchester in the UK in 2003. After completing her studies, Dr. Wang worked as a post-doctoral researcher at Queen’s University Belfast in the UK before joining The Petroleum Institute in Abu Dhabi, UAB, as a Senior Lecturer in 2008, where she was promoted to Assistant Professor with tenure in 2012.  She joined Rensselaer’s Department of Biomedical Engineering in 2015 as a Lecturer. Dr. Wang plays a key role in the data science education in the department and at SoE.

Dr. Mohamed received his BS degree from the Ain Shams University of Egypt in 1993 and his MS and PhD degrees in Biomedical Engineering from the University of Minnesota in 1997 and 2000, respectively. After completing his studies, Dr. Mohamed worked at the Wadsworth Center until 2009 and held several roles at IBM, RPI, SpimeSense Technologies, as well as the Egypt Nanotechnology Center until 2016. He joined Rensselaer’s Department of Biomedical Engineering in 2016 as a Lecturer. Dr. Mohamed plays a key role in the capstone design series of courses and also leads efforts related to introducing our students to the concepts behind biomedical instrumentation.